The Sing-A-Long Version of The Iconic Christmas Movie!

All tickets bought for this event will be for GENERAL ADMISSION seating.
There will be NO RESERVED seats
***WHEELCHAIR ACCESSIBLE seating is available online***
Also, if you need reasonable accommodations, please call our Box Office: 781.646.4849
Doors will open 45-Minutes prior to the start of the screening

Every holiday season, countless millions from all over the world gather around television screens to watch their favorite Christmas movies. It’s a Wonderful Life, A Christmas Carol (in all its many versions), A Christmas Story, How the Grinch Stole Christmas, A Charlie Brown Christmas, and of course, The Polar Express, are all universally beloved holiday movies. But no list of classic Christmas movies could ever be complete without including White Christmas starring Bing Crosby. Rosemary Clooney, Danny Kaye and Vera-Ellen! 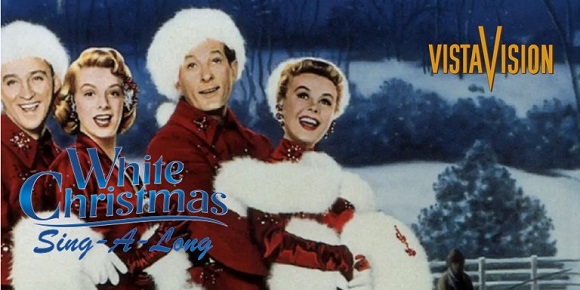 As the premiere Paramount Studios moving picture of the year, White Christmas was the first-ever film recorded and screened on the wide-screen as the ‘wonder-tech’ called VistaVision and was released 68 years ago on October 14, 1954. It premiered at New York’s, Radio City Music Hall. Variety magazine gave the film a thumbs up, saying: White Christmas should be a natural hit at the box office… ...Crosby and Kaye keep the entertainment going… ...clicking so well the team should call for a repeat…. White Christmas proved a financial bonanza, earning over $12 million dollars at the box office (a Star Wars-like amount in 1954). In fact, White Christmas was the biggest movie hit of the year.

See it now on the Big Screen accompanied by the Regent Theatre’s well-recognized full-concert sound system!