Benefit for Coalition For Courage, featuring Will Dailey, Autumn Hollow, and The Rationales!

Will Dailey & The Rivals pave a new path with their upcoming full length self titled album and first for Universal Republic Records. Breaking from an approach they employed on their last series of recordings, Will Dailey and his musical cohorts don’t stick to one simple theme, emotion, genre, or style this time out. Rather, the Boston group incorporates elements of introspective folk and invigorating pop into one big rock ‘n’ roll ride.

Autumn Hollow: www.autumnhollow.com
The Autumn Hollow Band is an Americana four-piece derivative of its Boston roots and the collaborative musicianship of Brendan Murphy, Todd Sampson, Scott Marucci, and Mike Burke. They’ve split their three year tenure between playing live, encouraging the fellowship of area roots musicians and recording their first album. The resultant album is a mish-mash of the Grateful Dead and The Band, more Wilco than Son Volt, but is a sound all their own. The Autumn Holler gents make you want to flick a Bic, raise a beer and sing along.

Coalition for Courage: http://coalitionforcourage.org/
Coalition for Courage is a product of a few people who cared enough to make something happen, and the donors who had the faith to help support the mission. We are less about change through public policy, and more about living with kids and identifying real places where we can make a real difference – today. 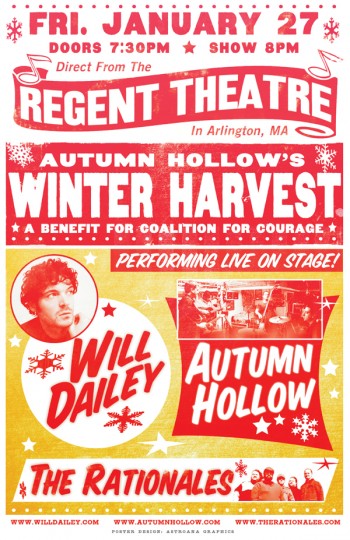