An Evening of Cabaret In-Theatre!

Limited Safe-Distance seating In-Theatre at Arlington's Showplace of Entertainment with the best singers in All of Greater Boston!

Experience Full-Concert Sound and Lighting Effects
The REGENT THEATRE continues to successfully and safely showcase LIVE! Performance with limited seating access. Face coverings are required while entering, moving about or leaving the premises. All guests will be asked to complete a brief health questionnaire.
In-Theatre seating will follow “SAFE-SEATING” guidelines set by Local Arlington and Massachusetts State health authorities.
Seating shall be limited to eighty (80) guests and will be sold as RESERVED SEATS.
Order early for best availability 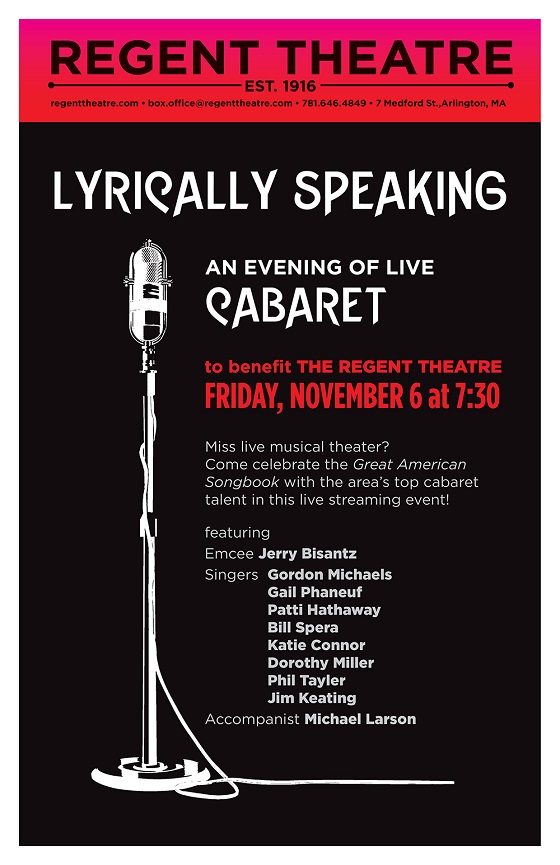 MICHAEL LARSON  (Accompanist)  Michael has been involved in the professional music scene since 1982. He studied classical piano with acclaimed concert pianist George Robert. From jazz to musical theatre, to classical piano, Michael can play it all.  A regular performer at Club café in Boston, he has accompanied many of the Greater Boston’s most talented musical artists.

GAIL PHANEUF  Playwright, composer, actress, producer, director, and teacher, Gail has worn many hats in the realm of live theater.  Her original musicals “Monsters: The Musical” was seen on the Regent stage, and her teen musical “The Love Note” (thelovenote.com) was produced Off Broadway.  Gail’s performance in the Tennessee Williams festival in Provincetown, MA earned her a glowing review in the NY Times. Gail is happy to appear on the Regent stage.

GORDON MICHAELS  A graduate of The Boston Conservatory of Music, with a focus on Opera, Gordon has had a long and varied professional career that includes performances with Patti LaBelle, Jennifer Holliday, James Taylor, The Platters, and Natalie Cole… just to name a few. He appeared in the film “Fame”, and actually attended that famous school in New York. Learn more about where he will appear next at gordonmicheals.com.

KATIE CONNOR   Katie has teamed up with Bill Spera to create a vibrant and exciting cabaret act. Recent performances include Image Theater and Club Café.  As an actress, her favorite roles have included Rizzo in “Grease”, Georgia in “The Full Monty, and Soupy in “Urinetown”.

BILL SPERA  Bill is excited to return to The Regent, where, as a musical theater actor,  he performed in “Pirates of Penzance”, and “Man of LaMancha”  Bill received the “Audience Favorite” award at The New England Fringe Festival, and he sings with the Boston Gay Men’s Chorus.

DOROTHY MILLER  Dorothy has performed as a much celebrated chanteuse in Santa Fe, Cape Cod, and Boston. She co-starred in the musical revue “Swingtime, USO” and has performed in “Cabaret Fest” in Provincetown, MA.

PHIL TAYLER  Phil recently portrayed Leo Frank in Moonbox Production’s Eliot Norton Award winning production of “Parade”, which h co-produced.  An Eliot Norton award winner himself, he is happy to revisit the role of “Stine” from “City Of Angels” and perform on the Regent Stage. .

JERRY BISANTZ  Jerry is happy to once again be on the Regent stage, having appeared recently in “God, Help Us” along with Ed Asner and Barbara Guertin.  He also portrayed Don Quixote in “Man of LaMancha” and the Pirate King in “Pirates of Penzance”  and Groucho Marx in “Hollywood/Ukraine” on the Regent stage. Along with Ann Garvin, he runs Image Theater in Lowell, MA (www.imagetheater.com) which has produced the works of local playwrights and composers since 2005.

PATTI HATHAWAY  Patti is an actress, a singer, and an amateur ukelele player. She has appeared in many regional theater productions.  Favorite roles include Apathy in “Monsters: The Musical”, The Lunch Lady in “The Love Note”, Bloody Mary in “South Pacific”, Domina in “A Funny Thing… Forum”.  And Olive in (the female version) “The Odd Couple”.

JIM KEATING   Jim is the head of the Board of Directors of BACA (Boston Association of Cabaret Artists). He is a regular contributor and performer at Club Café, one of the ONLY venues where true cabaret can be found in the Greater Boston area. He is happy to have the opportunity to perform and say a few things about their organization.