ENJOY THE GIFT of LAUGHTER! Stand-Up Comedy at its best, you "Must Capisce Italian"

This is a GENERAL ADMISSION & ABOUT THE SHOW… comedy event.

If you or someone in your party requires seating accommodation…
...please call our Box Office: 781.646.4849
Doors Will Open for Seating 30-Minutes prior to curtain… 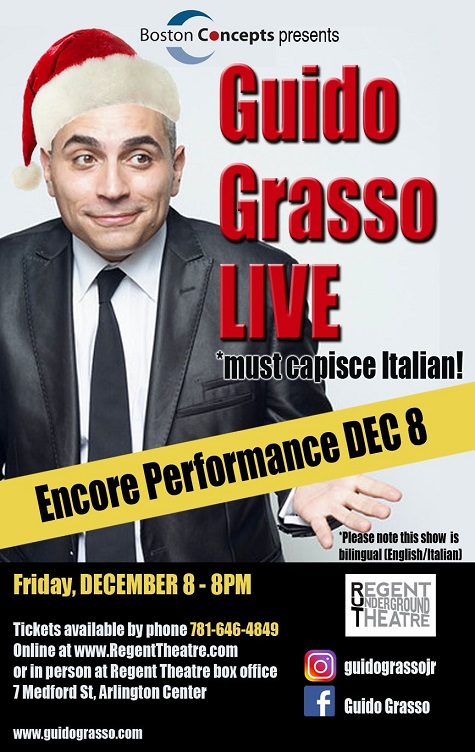 ABOUT GUIDO: Guido’s acting abilities are well known and sought out by the movie and television industry.  In 1998, Guido landed his first feature film role in Bonanno: A Godfather Story playing the young Peter Maggadino. After Bonanno, Guido studied in New York refining his craft at the Neighborhood Playhouse and The New Actor’s Workshop.  In New York, he worked with Mike Nichols, George Sills and George Morrison. Since then, Guido appeared in various films and television spots.  He was chosen to appear in two episodes of the acclaimed series Curb Your Enthusiasm where he appeared in scenes with Larry David and the venerable Martin Scorsese.  In 2012, he was seen in the feature film Mirror Mirror starring Julia Roberts.

In 2013, he appeared in the film Nicky Deuce with some cast members of The Sopranos (James Gandolfini, Michael Imperioli, Tony Sirico, Vincent Curatola and Steve Schirippa).  He can also be seen in The Walk directed by Robert Zemeckis with Joseph Gordon Levitt. Guido is blessed with a rapier wit, an outstanding stage presence and indelible comedic delivery.  Guido’s stand-up career is on a meteoric rise and he has been selected to open for Australian comedy super star Joe Avati on two world tours. Also part of the notorious Italian Bad Boyz of Comedy. Guido loves hand tossing pizza and is fluent in English, French and Italian.