A celebration of endings, beginnings - and the chance for a do-over ... on everything.
Grammy-Nominated Recording Artist


Until one week before her Solstice Celebration, Deborah Henson-Conant (DHC) will be on a 4-month tour of the U.S. & Europe with guitar legend Steve Vai (“The devil’s guitarist” from the movie Crossroads who cut his teeth in Frank Zappa’s band). After playing nearly 100 cities in 120 days, DHC brings it all back home in her own solo show at her hometown theater, the Regent in Arlington, MA.

“This has been the experience of a lifetime! Getting to perform one-on-one with one of the greatest living instrumentalists has changed the entire dimension of my own solo show.  And I specifically scheduled this Solstice Celebration right after the tour so I could capture that moment and put it on stage.” Deborah Henson-Conant

DHC’s One-Woman Shows combine Blues-Flamenco-Jazz-World music with solo theatre and an instrument invented specifically for her: the electric body-harp.

Buy VIP tix and you’re invited to the exclusive pre-show Reception RIGHT ONSTAGE with Deborah and a limited group of audience members.  You can see the instruments up-close-and-personal, ask Deborah whatever you want – and then get first choice of theater seats (including the ultra-cushy first two center rows!). Reception begins at 6:45 and ends at 7:20, ten minutes before the house opens to other audience members. (Wine & beer also available at the cash bar). 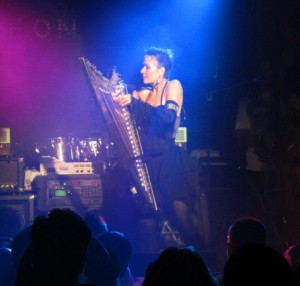