[Doors & Bar at 6:15] PLUS Live Performances by Randy Black and The Heathcroppers, The Dogmatics, Bim Skala Bim, TBA Allstars

All tickets bought for this event will be for GENERAL ADMISSION seating.
If you need reasonable accommodations, such as wheelchair accessible seating….
...please call our Box Office: 781.646.4849
Wheelchair Accessible seating is Available

“Boston rock history isn’t complete without a look at Chet’s Last Call, a seedy but spirited ‘80s club where many noted acts cut their chops under the guidance of eccentric yet beloved owner Chet Rooney. This head-spinning new film is a raucous, fast-paced tribute to him and the underground, anything-goes music of the time.”  —Steve Morse, ...former staff critic at the Boston Globe who now teaches Rock History at Berklee College of Music

This is the story of CHET’S LAST CALL “Ground zero of the underground Boston music scene in the 1980’s” and of its owner Richard (Chet) Rooney, a man who came full circle in his far too short life.

Chet died suddenly in his sleep on December 10th 2015. He helped countless bands get their start from 1982 to 1987. All the bands in this documentary got a lot of tough love and inspiration from Chet early in their now long careers. Later in life, Chet went on to help many of these same people get clean as a drug and alcohol counselor. Having been there and kicked it himself, Chet knew how to help. He was the youngest club owner in Boston and related to the music and the people who made that music like no other.

So, we decided to have an old fashioned Irish wake, Chet’s Last Call style: put on a show, film it, record it and make this documentary to honor our old friend, his beloved dive bar and to continue his mission to help people trapped in the bonds of addiction. A portion of all proceeds from this documentary will be used to help fund addiction treatment and prevention centers throughout the country

The two epic shows were recorded multi-track and filmed with multiple high definition cameras and professional lighting. Many musicians and friends flew back to Boston for these shows from across the country and internationally. We also interviewed over 40 rock stars, writers, former employees, family and friends as well as collected wonderful old video, posters, photos and memorabilia from Chet’s.

Chet’s friends were interviewed and shared their stories of his kindness to young misfit bands in need of a venue to get their music out to the world. Or, as a man who had been there and understood and would give you a shoulder to lean on.  Chet helped so many and they all are helping to make this film become a reality. 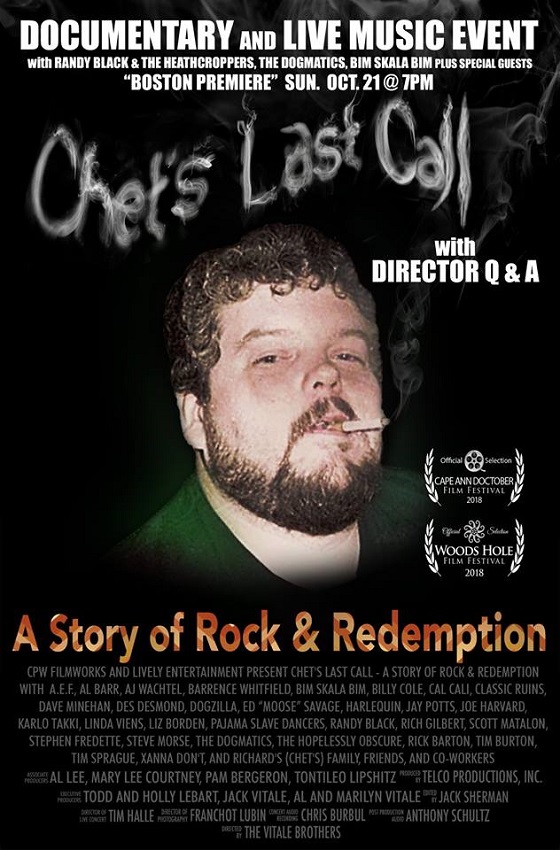